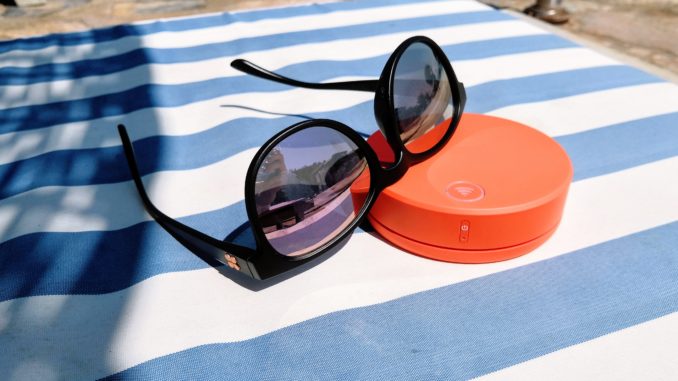 I’m lucky that I get to travel a lot with my job (although don’t imagine it’s all glam beaches and swim-up bars: it’s mostly the inside of conference rooms!), so I often have to think about how I’m going to get online from different parts of the world.

I deliberately chose Three for my mobile network because they had Feel At Home (now called ‘Go Roam’ which is definitely worse), which lets you use your mobile data without extra charges in some other countries. But the keyword is ‘some’: I quickly found that places like Japan and Turkey aren’t (currently) covered. Mobile data roaming is unbelievably expensive (I once managed to run up a £72 bill in about two minutes in China), so I still needed a solution.

Skyroam Solis is the answer to my prayers. It’s a circular orange box that lets you take 4G internet wherever you go. It also makes you the most popular person on the holiday, because you always have WiFi.

Carrying the little orange box is like having a virtual SIM card for 130+ countries. The company has negotiated deals with mobile providers in all kinds of places, but you don’t have to worry about how that all works: just make sure it definitely covers where you’re going if it’s somewhere a bit obscure (you hipster). It really does cover a lot of places, and everywhere I’ve been for work since getting one has been covered.

To connect, you just turn on the Solis and use the details on the sticker underneath to connect like any other WiFi network. You can connect up to 5 devices (laptops, tablets, smartphones etc) to the hotspot, which is enough for even me and my many phones. For most people, it’ll be enough for them and friends or family, which makes it cheaper if you split the costs.

When you first turn it on (especially in a new country), it’ll take the Solis a couple of minutes to connect. Press the big WiFi button on the top and when the light stops spinning and turns solid, it’s made a connection you’re good to go. There’s a smartphone app so you can check how much data you’ve got left and add more, too.

Skyroam Solis (or Skyrim, or Skyfall, or whatever I was calling it that day – things I like tend to end up with lots of nicknames) isn’t the cheapest, but like the engagement ring camera box, you have the option of either buying or renting, which is smart. WiFi is priced up separately, and you can load it on by the day, the month, per GB – whatever suits.

Personally, I travel a lot, so buying the Solis makes sense as it makes the data cheaper over time. The unit itself is £135, and then I tend to buy the unlimited WiFi day passes for £7 each (they’re £9 each if you’re renting). Honestly, for the peace of mind of knowing you’re going to have 24-hour WiFi everywhere you go, it’s so worth it: especially when you’ve got yourself lost in a country where you don’t speak the language, and firing up Google Maps and Translate would rinse your phone bill.

It’s worth noting that there are some negative reviews on Amazon UK which mention the WiFi slowing down after 500MB of use. I asked Skyroam about this, and they explained that the slowing down was an issue on the previous 24-hour pass system, but on the GoData (GB-by-GB) plan, or on the 24-hour passes under the new fair use system, it’s not a problem anymore. Sadly the Amazon reviews haven’t caught up, which I’m guessing puts a lot of people off trying what I’ve found to be a very good product.

The hotspot box even includes a 6,200 mAh phone battery with a USB-C connection, so you can charge your phone from it when it’s running low. That’s enough to fully charge most phones twice, if not more. To recharge the box itself, you just plug it in like a phone, but the battery lasts all day anyway.

For me, Skyroam Solis is an absolute must-have for anyone who travels often. I even use it to get online in UK airports on the way there, so I don’t have to use the horrible insecure public WiFi they offer. It doesn’t work on planes, though (nice try).

The little orange box is now the second thing I pack for a trip, right after my passport. If you want one of your own, you can buy directly from Skyroam, from Amazon, or Smartech at Selfridges.